This is how Airtel App spams you if you make frequent calls to India, wherever in the world you are!

Recently one of my friends, who is an American, mentioned that he received a promotional message on his US number about cheap calling to India. He sort of mentioned it to me because I happened to be the only connection he has in any manner to India. I did not suspect anything fishy and thought it is just one of those bulk promotional texts sent to a series of numbers and he just happened to be one of those who received it.

Today, someone on Reddit India complained of a similar happening. Although I can see a discussion around whether or not the user had installed any airtel app that got his number, I think this is not how Airtel is targeting its spam.

Looks like you need not have installed any Airtel App to be spammed by Airtel! You are doomed if any of the people you call to, or receive calls from, is based out of India and if (s)he has Airtel app installed, then you become the target of their promotion! How Airtel Targets its Spam:

First it was violating net neutrality, then it was secretly injecting tracking and ad script into all webpages you browser and now this smart spamming! Airtel is proving itself to be the Comast of India in every way of being evil to its customers! 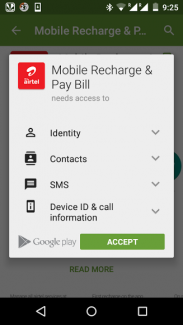