There has been this video that has been doing rounds on Facebook and Twitter recently. The video shows a bunch of people being interviewed on video calls for the job of “Director of Operations”. The candidates are given the job description which goes along the lines of “Unlimited hours. No breaks. The most important job is also the world's toughest job”. Finally it is revealed to the candidates that the job description is in fact that of “Mom”, after which the candidates turn emotional and thank their moms for everything.

The advertisement claims to have conducted real interviews - ie Real Calls via Video Conferencing with real candidates who applied for the job.

I would agree, it is one of the well-made ones and has an element of surprise that touches your emotions and does it works of making me know and remember the brand - “Cardstore”.

But PR agencies of late have started producing fake-real viral videos with paid actors. This is definitely one of those. Though I love the video I feel cheated when the video try to make me believe that these were real calls and real conversations.

Here is why I believe this is a staged video and not real calls:

But whatever, the video is a nice one. Could have been even more honest and heart-touching if only the fake setup was not too obvious as in this case. 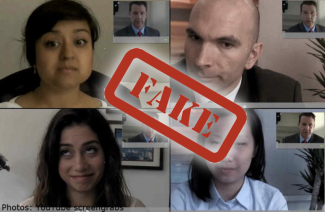