Croma enters e-Commerce space - But in the copy-paste way!

Electronics Retailers in India like Croma are definitely struggling with the advent of Flipkart and similar sites. Last week, when I waked into Croma Indranagar (Bangalore) for a camera, the store helper quoted a price of Rs 13300 for a specific model that I asked for. When showed him a screenshot from Flipkart, selling the same for Rs 11,600 (+ an additional 15% off on my Standard Chartered cart), he said they can not afford to sell at Flipkart prices.

However he asked me some time and then made a couple of calls (probably to his supervisor / manager) and finally offered to give it for Rs 12,000. I was happy to take it since I wanted to have the camera immediately, which I can not do in the case of flipkart and hence the deal (though a bit costlier than Flipkart), was fine for me. So, a discount of Rs 1,300 on just showing a screenshot of flipkart!

To cope with Flipkart, Croma seems to have launched http://www.cromaretail.com/ - their own online retail store. The prices are not as good as flipkart and seem to be pretty much the same as what is offered in their brick and mortar stores.

A quick look at the Croma site today showed it showcasing the range of Chromebooks, with a banner on the homepage, pointing to their Chromebooks landing page. The Homepage with Banner to Landing page The Landing Page for Chromebooks on Croma site

So far so good. The first thing that occured to me was to compare the prices on flipkart. Googled ‘Flipkart Chromebook’ that immediately took me to the Flipkart’s landing page for Chromebooks - http://www.flipkart.com/chromebook Wow, that was a surprise!

The landing page on Chrome’s website is an exact clone of Flipkart’s!!!

Here it got interesting.. So definitely one was copying from the other. Initially it occurred to me that the reason could be that both of them were using the same “Product Kit” or “Brochureware” that the Supplier had given. It would not be the case here since the two featured products were from two different makers - Acer and HP. Chances are little that HP and Acer worked together to make some Brochureware. It is also improbable that Google gave them a kit to put up as their Chromebook landing page, to both of them.

Next, I considered to give up whatever I was doing for an hour to determine who was copying from who.

Could not determine effectively from google caches, which one was first indexed.

Started Analyzing the images. The image names used are exactly the same. The EXIF data on the images was identical. This again indicates that one used another’s assets but still no evidence to confirm who copied from whom.

Both were using the same markup, exactly the same as the other were using. Still no evidence as to who copied whose.

Analysis other pages on Flipkart showed that they had similar markup on most pages. The classes pointed out earlier are used all over their site. It is part of some CSS framework that they use all over the site.

Croma’s other pages show no signs of such markup - http://www.cromaretail.com/Mobile-Phones-c-10.aspx

The gd-col, gu12, gd-row classes - found on other pages on flipkart are consistent with the markup used on the landing page. While these classes were no where found on any other page on the Croma Site.

Here is what has possibly happened. Flipkart got the landing page for Chromebooks designed by their awesome designer. Got the markup done. Crome people waited no long, to copy the whole markup (view-source) as-it-is and dumped it on their website!

What’s more? They even reduced the prices of the two Chromebooks featured to match the price of Flipkart. All other Chromebooks are priced higher on Croma site. Only these two match the Flipkart price!

They say - “plagiarism is the sincerest form of flattery”.

Dear Croma, I have great praise for flipkart but I have different ways to showcase my flattery. You seem to have chosen the wrong way of Plagiarism to show your flattery ;-) 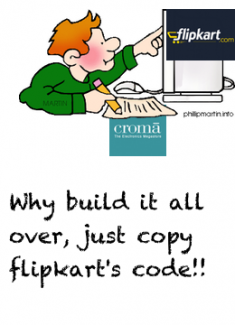