Ever Since we moved to Slack for our team’s instant messaging needs, what excited me the most is the nice set of APIs that Slack offers to seamlessly integrate your apps into Slack chat.

What we needed immediately was a basic bot that handled Karma functionality allowing people to say ‘Thanks’ to others using the usual ‘++’ annotation.

We were looking at options for various technologies. Node.js is the usual one that you hear a lot when people talk of chatbots these days.

Drupal was an option. We were skeptical at first. Having Drupal intercept and analyze almost 3- 4 messages every second at its peak hours sounded like trouble. And there would be no levels of caching involved here as each message is unique from a different user and should be processed uniquely.

But one clear advantage I could see and wanted to have, was to interface the rest of the team from the various complexities of Slack APIs and configuration, interfacing all of that through Drupal APIs. So if anyone needed to extend this bot further, they should not really worry about Slack API and they should be building very simple Drupal Modules.

Over a weekend, a couple of us teamed to build a chatbot for our Acquia India slack chatrooms, using what we knew best - Drupal. And we launched it on March 1st 2015. Our bot was christened Regina Cassandra. And the bot has been up and running ever since with no downtime or any issues so far.

Rarely used, but it can text people..

And when the Cricket World cup was happening, Regina was busy serving us scores whenever requested..

Regina also used to give everyone a daily fortune cookie. She doesn’t seem to do that anymore for the API that the fortune cookie module was using seems to be dead now.

The bot uses Slack’s Outgoing Webhooks to intercept each message posted to the chatrooms, and allows all modules on the chatbot site to intercept the message and respond to it. The bot (a Headless Drupal Site) has been hosted on a free-tier Acquia Cloud Subscription. With the decent performance it has had so far and less-than-a-second response times we currently see with the slackbot, we never saw a need to upgrade so far. 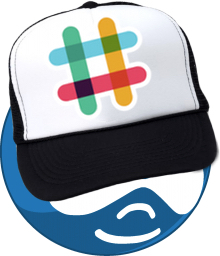