I had www.ArticleSpinner.in running on wordpress.

For those who havent stubmled upon what an Article Spinner is:

A tool that rewrites an article using different words / phrases, trying to retain the meaning of the original article as much as possible

The earlier WP version was good but had its limitations

Though I had have been building sites on Drupal since 5 years, they had been mostly using contrib modules. Whenever I had to code I used to go for Wordpress or start with scratch on PHP.

Thanks to Harvest, I can now build custom modules in Drupal.

Modules used:
Custom:
1 Module that shows the Article Spinner Page ( http://www.articlespinner.in/spinner ). On submit, checks the users credit balance etc and populates the spinned article into the text area on the spinner page. I am not going to dive deeper. The spin algorithm is as big a secret as KFC's secret recipe.

Contrib:
Besides the usual Views etc,. used:
* User registration password [Let users register with a password on the registration form when verification mail is required.]
* Rules [For implementation of Rules like Sending Emails on checkout, Adding initial credits to users account on registration etc]
* Ubercart [For Cart,Order,Product,Store management]
* Userpoints [This is the heart. The Userpoints remembers the credits available with each user and used the Userpoints API in the custom module for checking the available credits before spinning the article, for making deductions on spinning articles and adding credits on purchase ]

Rules beautifully gets Userpoints, Ubercart to work together with the custom module to achieve what I needed exactly.. 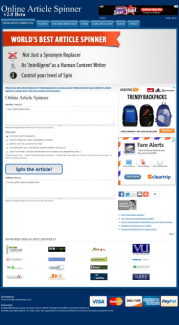